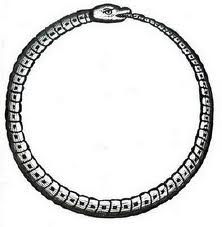 During one of the Lessons Jungian Psychology on a certain moment they come to talk about the story of Adam and Eve and suddenly she remembers that while being a child this story was her favorite one. She wanted to hear it over and over again. Why was it, she wonders, that she wanted to hear this story again and again and again. Why was this story her favorite one? Was it because of being disobedient or sinful she was banned from Paradise = had to leave home at 4? Did she deserve punishment because of being different?

Or is this preference based on a deep desire to return to Paradise, to return home? Or was there a deeper Knowing trying to comfort her in the situation she was in?

In her book Being happy with yourself Karen Hamaker-Zondag, her teacher, is giving a complete different interpretation of the Paradise story than the one we know from the bible, one that does not only feel better to her but also makes far more sense than the other one.

Paradise being Divine State of Oneness, but a completely unconscious state of being. This total unconscious way of life, also unaware of itself, Karen says, is like the beginning of life from a new born baby. However, there will come a moment in time in which something wants to detach itself from this unconscious state of being to be able to get to consciousness.
This process, she says, the Paradise story is showing us in a magnificent way when we look at it in a symbolically psychologically way. There are 4 Rivers in the Paradise and 2 central Trees. One Tree of Knowledge of good and bad and one Tree which Fruits give us Eternal Life. The Garden with the 4 Rivers is a Mandala, Symbol of Wholeness. Jung says when circular patterns devided in 4 appear in our dreams Healing is near. It is a very powerful Symbol.

About Tree Symbology Karen writes:
The Tree of Immortality or the Tree of Life can represent the Divine Core of the psyche. The Tree of Knowledge about Good and Bad is a tree providing us awareness. This Tree we need to develop Individuality. As long as we live in this complete state of unconsciousness we can eat Fruits from the Tree of Immortality without anything happening/changing for, we are both nothing and eternal, no consciousness and thus in a complete Divine State of being.

This can only be changed by the impulse wanting to become ourselves and learn discriminating. This is symbolized by eating the Fruits of the Tree of Knowledge about Good and Bad. But God has forbidden Adam and Eve to eat these Fruits and he has told them that the day they Will eat these Fruits they will die.

The Snake whispers in Eve’s ear that they won’t die but that God knows that when they, Adam and Eve, will eat those Fruits their eyes will be opened and they will be like Him and know about good and bad. Eve takes an apple and eats from it and also gives Adam some of it. They do not die but all at the sudden they are aware of being naked.
God is furious and bans them from Paradise. He punishes them with a life full of hard work for Adam and Eve to deliver children in pain.

How different the psychic meaning of this story and what a beautiful way to show the development of individuality in a human being making it possible to live a life of its own.
When a child learns to say “I” it starts making drawings of circles with crosses in it = Paradise with the 4 Rivers. It becomes aware of itself and it starts developing an Ego but to be able to do so it has to leave Paradise.

The Snake is an ancient Symbol of the flow of psychic energy, Karen says. The impulse to go in the flow comes from the Self and the Self knows what time is right for this individual child to take a step towards developing awareness. The psychic energy, the Snake, will move into that direction.

In many cultures the Feminine is described as being receptive and as a power to go in the flow. And that’s why it is Eve and not Adam who can hear the Snake, Eve being the receptive principle in every human being listens and follows what the Self says is right and natural in psychic development for this very moment.
To be able to develop fully it is needed that Yin and Yang, Female and Male go together, will unite within the psyche. And that is why Adam has to eat from the apple as well to make it possible to enter a new phase in life in that new way of being one.

“She was not punished? She wasn’t sinful or disobedient? No, she was not. She was obeying in a very strict way, obeying herself, her Self that knew the time was right for her to take steps on the Path of developing self awareness, time to walk her own Path her way, to learn the difference between good and bad, between her and the other.

And so she left home while being 4 and set out on her personal Journey through life.”